Ohh well, as usual, I have kept my promise of writing the post early and I am sure I am writing this in less than 7 months after the last past. Am I? Not sure, will check later.

Last day of the Trip:

We wake up, Kancha is the early bird. He gets up, takes a shower in icy cold water and wakes everyone else up, or that is what I happened. I am sure I was not the first to wake up. We pack stuff, pay for the rooming and set out on the journey.

Since it is already late to start and our chances of enjoying wild life is close to nil at that time, we decide to take an alternate route. A rarely used one which, as per many was a dangerous one. If a road through the jungle is dangerous, the danger has to be due to wild animals right? So we decide that's the way to be. A bunch of young guys, on bikes and danger, what do you expect? We had to jump for it.

So, the journey begins. We had towards Pulpalli (one of the towns in Wayanad District). This, as per me is the road towards the jungle road. By the time we reach Pulapalli town, we could feel horses racing in our tummy's. Yes, it was that bad. With the limited budget that we had, we decided to go to a small hotel or restaurant or dhaba or whatever you want to call it. Lets just call it an eatery. So we all have this tapioca and porota and beef and appams and stuff till the eatery is out of anything more to offer. Well, they did have stuff left, but nothing we wanted. That is when we realized the extent to which we had eaten. We were hungry, the food was yummy, no one thought about the tummy.

Now, everyone had started early in the morning (early for our standards) and we hadn't attended to any calls (if you know what I mean) in the morning, and now the calls had become really really urgent, but we had a long way to go. We rode on from there for an hour or so. We were passing through this nice woods. Serenity. It was somewhere around 1 hour after our breakfast. We were somewhere here: 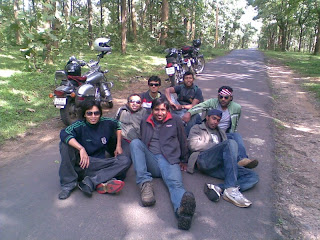 One guy can't avoid the call anymore. So we stop. He goes to mark his territory and we spend out time doing what we are seen doing in the pic. Time passes by, and we seem to be nowhere close to the jungle we were promised. By this time, everyone desperately wanted to attend to their respective calls. It was call of duty everywhere, but no place with proper range. So we continued riding till we reached a stream flowing through the woods. 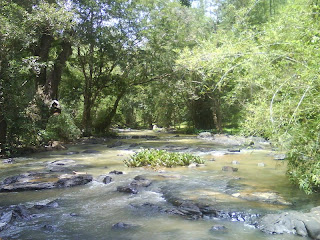 I did mention that Kancha was the only guy to take a shower in the morning, right? Now its not like we guys are dirty fellows who don't bath. So, we see this stream and we cannot control our itch. Also, the range was pretty well to attend to the calls. So people spread out making their calls privately. There were instances of people getting queued one be"hind" other after the call, which was particularly made in western style, and that came pretty naturally (for those who don't know the story already, I am talking about the western commode which was available naturally due to the shape of the rocks, and the way people were standing in queue to wash their bums). By the time we finished our calls and freshened up, the forest department paid us a visit and very politely *ahem* asked as to accompany them. With great struggle and with humility, we had to decline the hospitality. We had our commitments to keep after all, you see.

It was noon by the time we started from there. We reached the jungle soon after this. We had a long way to go. Now that the jungle had started, we were relieved. We saw a board claiming to be the entrance to Rajiv Gandhi National Park. In the normal route, the jungle lasts only one hour. So we started making plans for the rest of the day once we reach Bangalore. The route was pretty exciting. 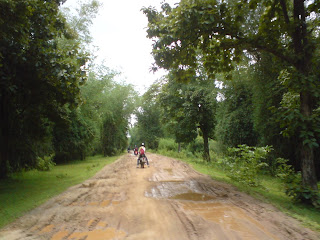 This is when we realized that filling up Pavan's bullet was a mistake. The lid of the petrol tank, which was not original, did not fix well. Due to the extremely beautiful condition of the road, the petrol kept spilling out. We came across a board claiming the main road to be only 30 KM. There was no limit to our happiness at that. We were already exhausted and we thought we could not endure this road for much longer, specially given the condition that most of us had pillions and it made the ride even more difficult.

We covered the 30 KM in a short duration of three and half hours and reached gundulpet. It was 4 PM now. On a normal day, we should have been here 1 hour from the time we started from our lodge, but we wanted adventure. Ohh, and the wild animals we wanted to spot? Here they are: 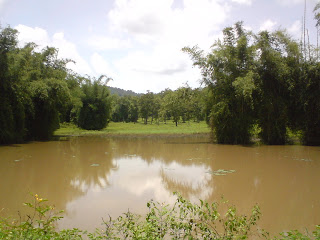 Can't see the animals? Don't worry, neither could we see anything other than specs.

By the time we reached Gundulpet, we were all exhausted. We took a break, had our snacks. Those who could not attend calls in the stream finished their calls and we proceeded further. Next stop was to be Mysore. Guide Raul took over from here saying he knew a nice dhaba in Mysore. We rode and rode and rode and rode and rode and rode, but no luck with the dhaba. Just when we had lost our patience, we got there. Now this was waaaaay past lunch time, and we could not hold much longer. So, we get down to business straight away. We order everything available. We eat without worrying about the world. We finished our food and the waiter got us an un-ordered dish. Yes, the bill was here. This is what is called reality bites. The bill passed around the table twice before people put their hands into the wallets. Everyone took out everything available. We left the place empty pocket and full tummy.

Now, all the frustration had to be taken out when we hit the Mysore-Bangalore Highway. Full speed ahead on the straight road till Maddur, Cafe Coffee Day. We sit here. Its already night time. We have another 2 hours to cover. Sandy and Raul have 6 more hours ride to Chennai. Sandy comes up with a suggestion to go to this place which resembles the Pathshaala of Rang De Basanti fame, but I am done for by this time. So are a few others. So we decide to wrap the trip up there.

I'm exhausted now. Nothing much happened after this. And by now, you are already bored.

Jash Jacob
---
Being yourself is the most important thing to be happy,